Justin and Karinda Gill moved to Darwin in 1996 from sunny Victoria, with an old car, a very old caravan, a dog, a small child and $1,000 in the bank; they were off to begin a new life and what an amazing journey it has been.

Justin worked as a Qualified Carpenter in Victoria with a builder that insisted in doing almost every facet of home construction themselves; this gave him skill sets in most trade areas which proved to be a valuable asset. Once in Darwin Justin worked as a tradesman with local businesses until 1999 when it was decided it was time to run their own show.

With Justin’s skill set, he and Karinda moved gracefully into the renovation market, Jagbuild Homes was born and fast became a reputable business. Karinda had worked in administration most of her life and felt that if they were to grow and succeed, she needed to expand her business knowledge. She went on to study accounting at what is now the Charles Darwin University; so together with these qualifications Justin and Karinda make an amazing project management team. 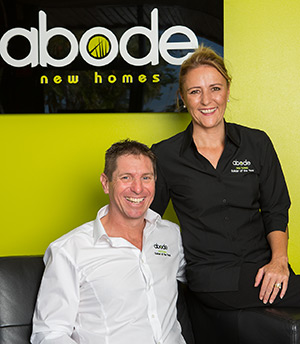 In 2002 the opportunity arose for them to enter the project home market by purchasing a franchise and over the next 4 years went on to construct 78 homes. Cavalier Homes Darwin Pty Ltd was now one of the largest and most respected home builders in the top End, winning local and national awards. However, the franchise model was beginning to limit their dreams of building modern homes which represent our unique lifestyle in the top end.

So in 2007, they moved away from the franchise model and Abode New Homes was born. Now their dream of operating the most perfect residential home building company was again under development.

The owners of Abode New Homes set themselves high goals – and wouldn’t have it any other way.

Justin and Karinda Gill have been running their residential building business in Darwin and love doing what they do. While Karinda looks after design, accounts and management, Justin, whose background is as a carpenter, looks after everything to do with construction and says between the two of them they’re a ‘pretty good mix’.

And the mix has produced some good results for the company. It was again for the 9th year in a row; regional winner in HIA’s Small/Medium Builder of the Year Award and our founder, Karinda Gill, was recently awarded 2017 Telstra NT Business Woman of the Year.

Justin believes their good mix of skills is one of the reasons the company has been so successful. ‘We care about our clients, our staff, our subcontractors, and we are a team that evolves,’ he explains. ‘I learnt earlier that to grow and have a good business you need good people around you, and they need to feel valued. So that’s our culture – we’re like one big family here and everyone chips in. We’ve got different people with different areas of expertise – you bring all that together as one and have a well-tuned, productive team.’

They complete up to 70 homes a year, working on around 30 projects at any one time. Justin says that the very slight slowdown that faced the market in 2017 had given the company time to ‘catch its breath’ and plan for the next stage of the development.

Constant improvement is a big deal for the couple. ‘It’s always about trying to be better. The day you say “I’m done; I’m at the top” is the day you start going backwards,’ Justin says. ‘If, for example, there’s been a mistake we sit down and work out what happened so as not to let it happen again.

‘We set pretty high goals and I guess you’ve got to dream … We seem to keep dreaming and keep achieving our goals, so we’ve got to take the next step further.  What drives us is that we enjoy it – we enjoy what we do and we always want to be better.’ As a result of this philosophy Justin says that generally Abode New Homes builds its own designs rather than working with a client’s design, because not only do they know and understand their own houses, it also allows them more time and control to develop other areas of the business. And with the shortage of land available for development in Darwin, Justin and Karinda have had to come up with some innovative solutions to keep growing.

‘We’ve really got two main markets at the moment – second and third time buyers and an [increasingly important] investor market – and you’ve really got to treat them completely differently,’ Justin explains.

‘Your second home buyers want the home they are going to live in, so it’s got to be designed to suit the family. The bulk of our homes, for example, have a study nook close to the living areas so mum and dad can be cooking or in the living room and they can still see what the kids are doing.

‘Then we’ve got the investor market which is numbers driven. It’s “how can we invest in housing and get a return on it with minimal problems or challenges?”

As a result Abode New Homes has branched into property managing also – renting out, maintaining and managing the properties they have built – offering investors a one-stop solution. Justin says the development has been very well received by the investor market. ‘It’s pretty exciting… It won’t be something we will need to go out and advertise, it will be part of the service we offer.’ Although it is this type of innovation that has kept the business one step ahead of its competitors, Justin says they try not to compare themselves with other companies.

‘We don’t look at it as a competitiveness against the opposition, it’s more about how can we better our business. If you focus on what other businesses are doing around you, you can get side tracked.’ But by doing this it appears that Abode New Homes continues to lead the way. ‘Between 12 and 18 months after we’ve done something that we’ve looked into and researched, you’ll start to see it pop up in the opposition product,’ Justin laughs. ‘You’ve then got to try and re-invent yourself again. We’re currently at the point in our market and our designs that what we were doing differently has now become part of the norm.

‘So then we look at what we’re doing and say “OK, we need to freshen up and have that point of difference again”.’

Which is a philosophy that is likely to keep Abode New Homes far from the norm in the coming years.

Justin Gill, one half of Abode New Homes in Darwin, says that designing for the climate is a major part of producing a liveable home, especially in the tropics.

‘You can build up a rectangle box and it will be hot and uncomfortable and you’re not going to want to live there. Or you can put a lot of thought into the design and make it comfortable; use shading and catch breezes to help keep places comfortable and cool, take into consideration noises in each room, so the way you design will reduce sound and make the home comfortable to live in.’ The company includes solar hot water in all its homes, and also use an ‘eco-switch’ that turns off all the lights and fans with one switch.

‘Simple things like that that do save a lot of energy and are smart, but they don’t have to be fully green or expensive,’ Justin explains. ‘You always look at the options and think how can we just tune that a little bit better and be one step ahead.’

VIRTUAL DISPLAY VILLAGE
NEW HOME DESIGNS
ABOUT US
CONTACT US

We have an awesome house thanks to awesome people and we moved in 8 weeks early!"

You can tell a good builder by the after sales service... yours has been great!"

Our house started at the same time as our neighbour. We have had a dream run, moved in early and would build with Abode again. Our neighbour doesn't have the same feelings for their builder."